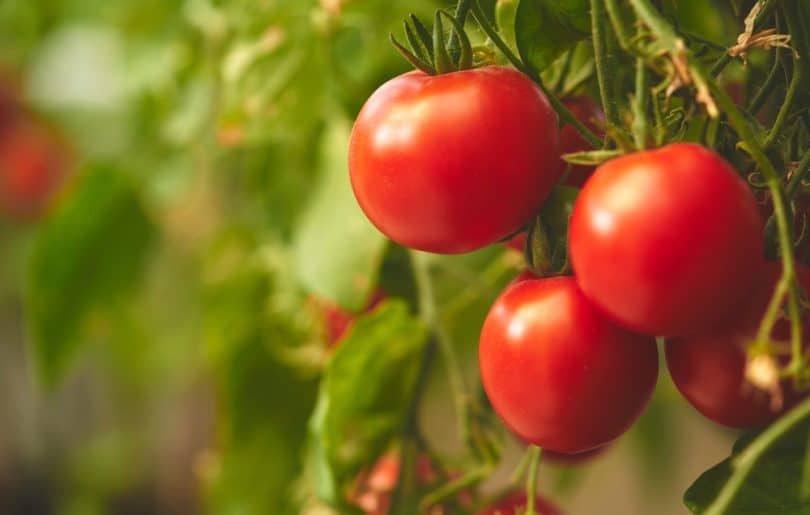 Tomatoes are an incredibly versatile food and are used in a variety of salads and cooked dishes as well as for making sauces and drinks.

If you’ve ever considered growing your own tomatoes, it isn’t as challenging as you might think.

Tomatoes are such a common type of food that it’s easy to take them for granted but there are countless favourites that wouldn’t be the same without them, from pasta and pizzas to soups and sandwiches.

Although buying tomatoes at the supermarket is very convenient and gives you a lot of choice, there is a great sense of reward that comes with growing your own tomatoes.

In this guide, we’ve covered every aspect of growing tomatoes, including growing conditions, maintenance, the best time of the year to sow seeds, mistakes to avoid and how to deal with commons diseases and pests.

Tomatoes are the produce of the tomato plant, or Solanum lycopersicum, to give it its scientific name. The word ‘tomato’ comes from the Spanish word ‘tomate’ and the plant originates from South and Central America.

Thanks to modern tools and technology, today there are a huge variety of tomatoes grown in all parts of the world.

Although tomato is technically a fruit, in practical terms they’re much closer to a vegetable, considering how they’re used in cooking and their low sugar content.

Below are some of the most popular varieties of tomato –

Below are all the steps you need to take to ensure that your tomato plants thrive and produce the best fruit.

Growing tomato plants in the right conditions is vital. For the first eight to ten weeks, the seeds will need to be sown indoors. You should never sow tomato seeds directly into outdoor soil for a couple of reasons.

For one, the seedlings will almost certainly be eaten by slugs and snails as soon as they begin to germinate. Also, the temperature outdoors at night will be far from ideal for new seeds and there’s a good chance they won’t take.

The right time to sow

One of the most important aspects of growing tomatoes successfully is to sow the seeds at the right time. Tomato plants need plenty of light to flourish. Without this, the plants will not grow as strong and won’t produce as many tomatoes.

Bearing this in mind, the best time of the year to sow seeds would be late March. This will give you plenty of time to grow the plants indoors initially, and then plant them in the soil outdoors once there’s no risk of frost and they’ll get a good amount of sunlight.

If you’re growing your plants in a greenhouse, then you can sow the seeds earlier since they’ll be protected from the elements.

Caring for the seedlings

In the first few weeks after sowing the seeds, you should take great care to provide the best conditions possible.

You should ensure that the soil or compost you use is moist but not overly saturated. You should also place the tray with your seeds in a spot that’s warm but out of direct sunlight.

After roughly 2-4 weeks, you should notice seedlings begin to appear. After this happens, you can move them into more direct sunlight, such as a windowsill, while still making sure to keep the soil moist.

At around 50-60 days, you’ll be able to move your plants into individual plant pots. You should keep an eye on their growth and use larger pots as you need to, always being careful to ensure you don’t damage the roots and use high-quality compost.

After your plants have had time to become established indoors, you can then move them outside. You should choose a spot that gets a decent amount of sunlight but still has adequate shade.

Once the fruit of your plants has ripened enough, you can harvest them. The best time to harvest would be between May and October. Of course, this can vary somewhat depending on when you first planted them.

One of the most important aspects of growing tomatoes that are ripe and healthy is ensuring that the plants get the right amount of water and nutrients.

Irregular watering is one of the most common mistakes that those who are new to growing tomatoes make. The right way to water tomatoes is lightly but often. Make sure you provide a decent amount of water but don’t allow the soil to become overly saturated. You should also avoid getting water on the leaves since this can lead to problems like leaf mould.

As far as feeding the plants, you should use a complete fertiliser and feed them once every couple of weeks after the plants have begun to produce fruit.

Do You Need a Greenhouse to Grow Tomatoes?

Whether or not you need a greenhouse to grow tomatoes will depend on the type of tomatoes you want to grow. For example, vine tomatoes are certainly better grown in a greenhouse or polytunnel, while bush tomatoes can thrive outdoors.

An obvious big advantage of having a greenhouse for growing tomatoes and other fruits/vegetables in is that you’re able to protect them from the harsh elements.

Although growing tomatoes can be a greatly rewarding thing to do, it can also be frustrating when your plants don’t produce healthy fruit that’s suitable for use.

Below are some of the most common mistakes to avoid.

Improper watering is certainly a very common mistake that new growers of tomatoes make. For tomato plants to flourish, you need to water them in the right way. This means keeping the moisture levels of the soil as consistent as possible.

The best way to accomplish this is by having a regular watering schedule (mid-morning or early evening are both good times) and avoiding overwatering the plants.

Using mulch is a great way to ensure that soil that your tomato plants are in is kept cool and doesn’t dry out.

Layering mulch around the edges of the stem of your plants will keep the soil moist and cool while still allowing the roots to absorb moisture when you water them.

If you’re growing indeterminate tomatoes, then pruning is always recommended. Pruning will help to improve airflow as well as improving the yield of the plants and promoting quicker ripening of the fruit.

Not providing enough space is another common mistake new growers of tomato plants often make and can cause issues due to reduced airflow and one plant shading another, which can restrict production of fruit.

The amount of space you need to provide tomato plants will depend on their variety and the size of the beds where you’re growing them.

Unfortunately, tomatoes can be susceptible to developing certain problems. Below are some of the most common.

Leaf mould is a common problem for tomato plants, particularly those that are grown in greenhouses. Leaf mould generally develops in the summer months and is often caused by overwatering.

There are a few ways to prevent leaf mould from occurring in the first place. These include –

Fungicides aren’t usually effective on leaf mould, so prevention is the way to go.

The cause of blossom end rot is the plants not getting enough calcium. This is usually due to there being too little calcium in the soil or the pH of the soil being wrong. Tomato plants require slightly acidic soil to grow best, with a pH of around 6.5 so they’re able to properly absorb calcium.

To prevent blossom end rot, you should make sure you plant the seeds in the right soil to begin with and regularly test the pH of the soil to make sure it doesn’t lose its acidity over time.

Leaf roll isn’t as serious as some of the other problems we’ve looked at since tomato plants that display it, will usually still bear healthy fruit. That being said – it’s still a good idea to keep on top of it since it can be a sign of bigger problems. As the name suggests, tomato plants with leaf roll will have their leaves curl up.

The best way to prevent leaf roll is to avoid over-pruning and make sure the soil isn’t overly saturated.

Bacterial canker is a problem that causes yellow spots to form on ripening tomatoes. Although bacterial canker appears naturally, it’s often spread by infected garden tools or other plants. Once the bacteria’s in the soil, it’s very easy for plants to get infected when rainwater splashes it up onto the plant’s leaves. Plants that have holes in their leaves are particularly vulnerable to it.

If you notice your tomatoes have bacterial canker, then you should immediately dispose of them as well as the soil they’re planted in when possible.