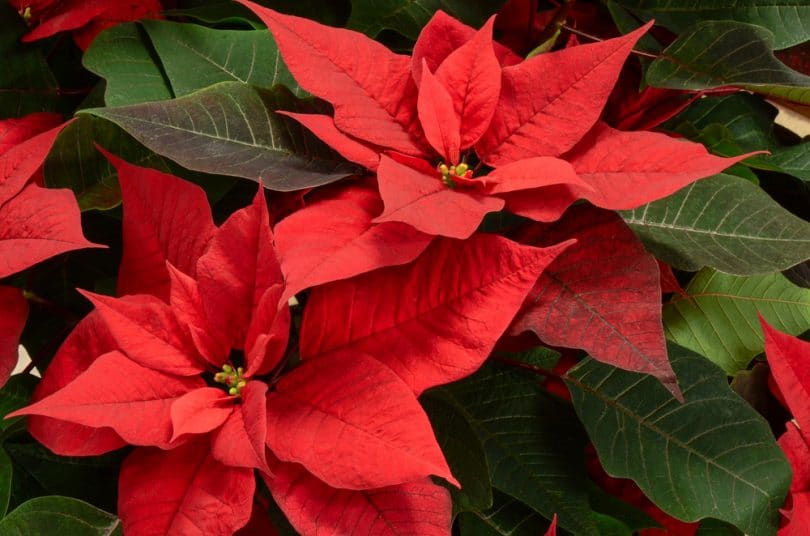 When you think of poinsettias, you almost certainly think of Christmas. With their star-like leaves and (most commonly) red and green colour, these vibrant flowering plants make a popular addition to many UK homes over the festive season.

Yet to bring it into your home during its December flowering period, only to discard it weeks later, does the poinsettia an injustice. In fact, if properly cared for, this colourful plant can survive the rest of the year in the UK, ready to bloom again next Christmas.

As the poinsettia is native to Mexico, it does require some care and attention to keep it alive this far north – this is not a plant you can leave to fend for itself.  It’s important to keep it at the correct temperature, and water it the right amount, as well as to replicate its natural winter daylight hours if you want it to re-bloom – which we must warn you, won’t be as impressive second time around.

If that all sounds a bit daunting, don’t worry. We’ve put together this guide to the best poinsettia care and growing tips, to show you how you can keep a poinsettia healthy throughout the year, and benefit from its beautiful display of festive flowers for a second season – because a poinsettia isn’t just for Christmas!

The poinsettia (Euphorbia pulcherrima) is a perennial shrub, native to the sub-tropical forests of Mexico and Central America. It was traditionally used by the Aztecs for medicinal and decorative purposes.

The plant gets its name from Joel Roberts Poinsett, a US diplomat based in Mexico, who was the first person to bring it to the US in 1828 – from where it was cultivated and sold around the world. National Poinsettia Day is celebrated on 12th of December, to commemorate the anniversary of his death.

Other names for poinsettia include Mexican Flame Leaf, Winter Rose and Noche Buena, as well as the more festive Christmas Flower and Christmas Star. The poinsettia is a hugely popular plant for the festive season, and many households will purchase one to display as a decoration in December, and then discard it come January.

The poinsettia’s long-term association with Christmas is said to have originated from a Mexican legend, which tells of how a poor child, who could not afford to buy flowers, instead picked weeds from the roadside to lay at the church altar on Christmas Eve. A miracle then took place, and the weeds were transformed into the vivid red blooms of the poinsettia. Today, the plant is said to symbolise celebration, success and good cheer.

Potted poinsettias typically reach a height of up to 60cm and a spread of up to 40cm. As well as the most popular flaming red colour, poinsettia bracts (as the colourful leaves are more accurately known) can be orangey, yellow, pink or white. Hybrids with bi-coloured and marbled leaves are also available – in fact, there are now over 30 different varieties of named poinsettias.

The coloured bracts surround the true flower of the plant, which are the yellow and green clusters at the centre. As the bracts are leaves, not petals, they last much longer than regular flowers (up to 12 weeks), which is what enables people to display them in their homes for such a lengthy amount of time over the festive period.

Finally, poinsettias are also often associated with the famous Mexican painter Frida Kahlo, featuring in depictions of the artist, and in her work – such as in the 1943 painting ‘Flower of Life’, which incorporates the poinsettia as part of a phallic or hermaphroditic symbol.

Poinsettias require bright, filtered light in order to thrive. Their ideal growing temperature is 15 – 20°C, although they can go down to 13°C around pruning time (April). The best place to put them is on a windowsill or in a greenhouse, where they can bask in non-direct sunlight. You can also place them outside in a sheltered area of the garden, during summertime only.

Poinsettias require sufficient water, but not too much. You should aim to water the plant only when the top layer of its soil is almost completely dry. Be very careful not to over-water your poinsettia, as this can lead to root rot and can kill the plant. Poinsettias do flower in humid conditions, so you can mist your plant during winter to replicate this.

In order for it to re-bloom, you will need to replicate the poinsettia’s natural life cycle. Do this by pruning the plant back to 10cm in April, and repotting it in May. The RHS recommends potting poinsettias in a mixture of 3 parts John Innes No.3, one-part grit, and feeding it monthly with high potassium, low nitrogen fertilizer.

From October onwards, you’ll need to replicate the short winter sunlight hours that your indoor plant would experience if it was outside. After 10 hours of daylight each day, move the plant to a dark room, devoid of all light. Do this every night, to initiate the winter flowering process.

The native habitat of poinsettias is in the sub-tropical forests of Mexico, where they grow on hillsides and wooded ravines, and thrive in semi-cool, humid conditions, with lots of sunlight. Their flowering period is during winter, December to January, during which time they experience short days of 10 – 12 hours.

The ideal growing temperature for poinsettias is between 15 and 20°C. They grow in loose soil with good drainage – they like it to be moist, but not waterlogged, as this can cause root rot. In warm, tropical climates, poinsettia shrubs growing outside can reach heights of up to 3 metres – much larger than the potted versions grown in the UK.

Where To Buy Poinsettia

The best place to buy a poinsettia is from a reputable garden centre, where it will (hopefully) have been taken care of in the proper way i.e. kept warm and given the correct amount of water. If you prefer to buy online, you can purchase poinsettias from a range of specialist growers and e-commerce florists, such as Interflora.

Poinsettias are also available to purchase from many supermarkets and shops around Christmas time. However, they will often have been treated in the same way as the rest of the flowers on sale, and may have been under or overwatered, and placed in a draughty area near the door, which is too cold for the plant to remain healthy. Never buy a poinsettia from an outdoor market, for the same reason.

You should always check the soil of your poinsettia prior to purchasing – the soil of a well-cared-for plant should be slightly damp, but not too wet. Once purchased, wrap the plant carefully in paper or a plastic bag when taking it home from the shop during winter, to prevent damage to the leaves from cold temperatures. A plant which has been grown in the UK will be more hardened to our climate, so try to buy locally if you can.

How To Make Poinsettias Rebloom

In order to make your poinsettia re-bloom the following December, you’ll need to care for it throughout the year and replicate its natural growing conditions. This includes pruning it in spring and repotting it in early May. You should then keep your poinsettia in a light place at a temperature of 15 – 18°C. Once the new growth has reached 15 – 20cm, pinch the tips to encourage branching.

The key to making your poinsettia re-bloom is to replicate its short winter days. Come autumn, start leaving it in the light for 10 hours, then moving it to an entirely dark room, devoid of any natural or artificial light, for the remaining 14 hours. If you don’t have a suitable room, you could cover the poinsettia with a large box instead.

Ensure the daytime temperature remains constant at around 18 – 20°C (the nightly temperature can be slightly cooler, around 13 – 15°C). Continue to do this every day, without fail, until December, and the bracts should hopefully start to turn colourful again.

Getting a poinsettia to re-bloom is not an easy task, and you shouldn’t be disheartened if it doesn’t happen. It’s also important to be aware that, even if you do everything right, poinsettias will not be as impressive second time around. They are likely to be taller and more shrub-like, and their blooms will be vastly inferior compared to the first year’s show. Two years is the maximum you can reasonably expect to get out of the plant.

Are Poinsettias Poisonous To Cats?

Poinsettias can be mildly toxic to cats (and dogs) if ingested. The milky white sap contains chemicals which can cause adverse reactions such as nausea, vomiting or drooling. If a large amount of the plant is ingested, this could result in poisoning – but this is a highly unlikely outcome, as a cat will generally stop eating upon tasting the unpleasant flavour from the sap.

A more worrying danger to your cat is if the plant has been treated with harsh pesticides, as these can cause severe reactions in some cases.

If the sap comes into contact with your cat’s skin or eyes, signs of irritation such as redness and swelling may also be observed. These types of symptoms are rare, and veterinary attention is not usually required, except in very extreme cases.

Although the poinsettia is not at all likely to be fatal to cats, you should still exercise caution when bringing one into a house with a cat, especially a kitten, who will be more susceptible to the negative effects of chemicals. Make sure to keep an eye on your cat and do not allow him/her to eat any part of the plant.

Can Poinsettias Make You Sick?

Poinsettias can cause mild stomach upset to humans if ingested in large quantities (as can many plants). The severity of this would depend on the amount eaten, and the age and health of the person, with babies and young children naturally being more at risk – but it would not be fatal. Make sure to keep poinsettias out of reach of children, to avoid any chance of sickness from accidental ingesting or potential choking.

A more likely risk to humans is some kind of dermatologic reaction. If the sap comes into contact with the skin of a person who is susceptible, symptoms of contact dermatitis, such as a rash, redness, and/or itching, could present. This can be avoided by not handling the plant.

The most serious way in which poinsettias have the potential to cause harm is to a person with a latex allergy. Poinsettias are from the same plant family as rubber trees, and their milky sap contains a compound similar to latex. This has the ability to cause a severe reaction in someone with an allergy, with symptoms such as rashes, shortness of breath and chest pain. There have even been reports of people suffering anaphylactic shock as a result of being around a poinsettia plant.

Although they favour a humid environment, poinsettias are very sensitive to overwatering. Excessive water and poor drainage can cause root and stem rot, and kill the plant. To avoid this problem, make sure to only add water when the surface of the soil has almost – but not completely – dried out.

Poinsettias are also susceptible to mould and mildew, which can appear as anything from a dusty white covering, to lesions and brown spots on leaves. Botrytis cinerea (grey mould) is one of the worst culprits. Mould can be caused by watering the leaves, high humidity, and stagnant air in a greenhouse – fight it by increasing airflow, decreasing humidity and applying a preventative fungicide.

Another common problem that growers face is leaf-dropping. This can occur as a result of overly warm, dry growing conditions. If your poinsettia’s leaves are dying, move it to a slightly cooler location, make sure it has enough water and mist it using a spray bottle to replicate humidity.