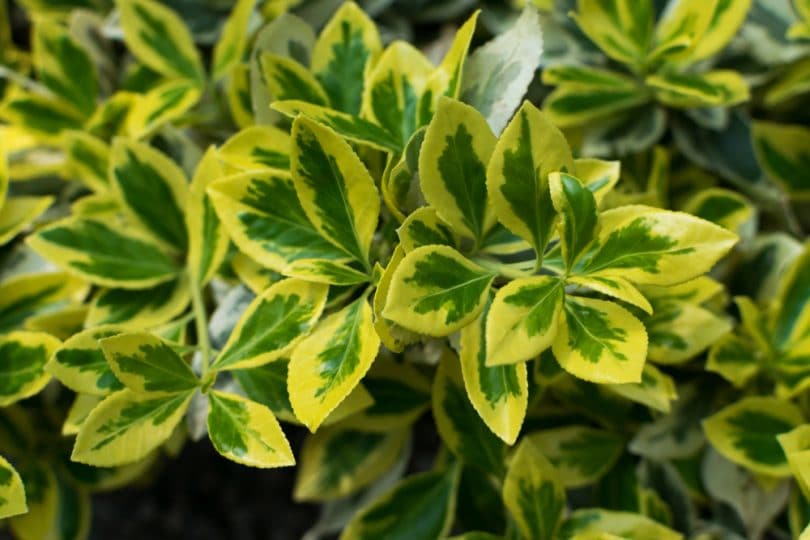 Euonymus plants are incredibly popular in the UK and come in a wide variety of colours.

Euonymus can be found in countless gardens and parks throughout the UK and its many species make it perfect if you’re looking to add some colour and variety to your garden.

In this guide we’ll be looking in-depth at euonymus, including its various species, how to grow euonymus in your garden, where to buy it and common diseases.

Let’s start by looking at the origins and popular varieties of euonymus.

Euonymus comprises a series of flowering plants, of which there are roughly 170 species – some being deciduous and some evergreen. They are known by several names depending on the country. Some common terms for Euonymus plants include spindle tree, strawberry bush and wintercreeper.

The different species of euonymus are native mostly to East Asia but they can also be found in several places throughout Europe, North America and China.

Although euonymus plants do have some practical uses, for example spindle is used to make charcoal and spinning wool amongst other things, its popularity is mostly down to its appearance. Euonymus plants look great in a variety of settings and the range of colours you can get them in makes them perfect for gardeners.

Some of the most popular species of euonymus plants include –

There are several varieties of euonymus fortunei and they’re usually named after the colour of their leaves. One of the most popular varieties is known as Emerald n’ Gold. As you would imagine from the name, the leaves of this plant are green and gold. It’s a very popular species with gardeners and can grow to be 3ft tall.

Another popular species of euonymus, Atropurpureus is very striking to look at thanks to its purple leaves and scarlet berries. It’s a great choice of plant if you want to add colour and interest to your garden.

You might know this plant by one of its more common names i.e. winged spindle or burning bush. This plant looks particularly good during the autumn when its leaves turn a deep shade of red.

More commonly known as American euonymus or strawberry bush, this deciduous species of euonymus can grow to be 6 feet tall and has striking green and purple flowers.

If you’re looking for a species of euonymus that provides great coverage, then euonymus japonicus is one of the best. It can grow to be 15 feet tall and its growth is extremely dense, making it perfect for hedges.

If you want to grow your own euonymus then you’ll need to be aware of its various requirements, including how much light it will need, the soil requirements, and water and fertiliser requirements.

A very handy thing about euonymus plants is that they do very well in the shade. However, if you want the leaves to be at their most vibrant, then it’s a good idea to ensure it’ll get at least some light during the day.

Generally, you won’t need to use fertiliser for euonymus plants. However, if you’re planting them in a container or the soil condition is quite poor, then you can use a shrub fertiliser on them.

Euonymus can be planted at pretty much any time of the year, providing the soil is in decent condition and not frozen. That being said – there are certain times of the year that are more optimal for planting than others. The best time to plant euonymus would be early spring or late summer.

When it comes to picking the right spot to plant euonymus, the main thing you want to ensure is that it has adequate space. This will allow for proper air circulation and help to prevent diseases.

Make sure you dig a hole that’s roughly twice the size of the root ball and if you want, you can add some fertiliser to the soil when first planting it. You should water it regularly for the first year, but after that it will require very little, if any watering.

Pruning Euonymus & Mixing with Other Plants

Because euonymus plants are slow-growing, you won’t need to prune them that much. However, when you first plant them it’s a good idea to prune them when you notice new growth coming through.

As for mixing euonymus with other plants, they look great with more colourful hedges and flowers. You can also plant multiple species of euonymus next to each other, providing you allow enough space between them.

The Best Euonymus Plants to Use For Hedging

Euonymus plants are very often used for hedging due to their low maintenance and ability to cope in most environments. There are also certain species that grow to be very tall, making them great for privacy and creating shade.

Below are some of the best species of euonymus you can use for hedging.

Emerald n’ Gold euonymus is an obvious choice as a hedging plant. Not only does it look great, with it’s green and gold leaves, but it also grows at a decent rate without needing too much pruning.

Another great euonymus plant for hedging would be Euonymus Japonicus. As we mentioned earlier, the high growth rate makes it perfect for getting a lot of coverage. This plant isn’t just practical though, it also looks great thanks to its yellow and green leaves. It also sprouts pink fruits in the autumn.

Emerald Gaiety would work very well for hedging too. Its compact structure and striking white-tinted leaves make it an excellent alternative to more common types of euonymus like Emerald n Gold.

The habitat and growing conditions of euonymus will usually vary depending on the species. Let’s look at a variety of euonymus that grows in the wild in the UK – spindle. Spindle can usually be found growing on the edge of forests. When it grows in the wild, it provides great value to wildlife, with a range of insects feeding on its leaves, including caterpillars, moths and butterflies.

As with other species of euonymus, spindle does well in the shade and typically grows between 10 to 20 feet tall, although it can grow higher in certain circumstances.

Where To Buy Euonymus

There are many places you can buy euonymus plants from. The main decision you need to make when deciding where to buy from is whether you’re going to buy online or in-person from a shop or plant nursery.

Buying online obviously has the big advantage of convenience. You can pick exactly what species of plant you want and have it delivered to your front door. The downside to ordering online, however, is not being able to see the condition of the plant for yourself.

If you decide to buy in-person, then you’ll of course want to inspect any plants you’re considering, to ensure they’re in good condition and don’t show any signs of disease. An advantage of buying from a specialist garden centre or nursery is that you’ll usually be able to get expert advice when it comes to getting the right species for your garden, how to best plant it and on-going care.

Like many other flowering plants, euonymus is susceptible to certain diseases and pests.

Let’s have a look at some of the most common euonymus diseases, including how to deal with them:

Powdery mildew, as the name would imply, is where spores and growths start to appear on the plant and give the surface an appearance like it’s coated in powder. It can cause new shoots to grow in an irregular way and makes the leaves of the plant fall.

To prevent powdery mildew from appearing, it’s a good idea to prune the plant to allow for proper circulation. You can also use fungicide sprays to treat and prevent it. If you notice spores on the leaves, then it’s a good idea to wash them off from above with water too.

Crown gall attacks the root of euonymus plants and when it’s serious, cause the stems to die. It’s most likely to be seen when the plant is young and under stress, whether it’s due to drought, poor soil conditions or injury.

In order to treat a euonymus plant with crown gall, you should cut out any parts of the plant that display signs of gall, being sure to sterilize your tools after each use. You should also dig up and destroy any plants that look too infected to save or that are already dead.

The best way to deal with Anthracnose would be to collect and destroy any leaves or twigs that have been infected to prevent further spread. It’s also a good idea to prune any leaves that are still on the plant that show signs of infection. Fungicide sprays can be used on infected plants too and can often help prevent the problem from becoming more severe.

This fungus also causes the appearance of brown spots on the leaves of euonymus plants. The spots can vary in size, from being barely visible to half an inch and can quite easily cover the entire leaves.

Although leaf spot is quite common, it’s usually not something that will cause plants to die. To treat a plant that has leaf spot, you should collect and destroy the fallen leaves that have been infected and spray the plant with a suitable fungicide.

In order to prevent sooty mould from becoming a problem, you should wash the leaves of the plant every couple of days with water. You should also be sure to prune any leaves that show obvious signs of the mould. You can keep the insects that cause sooty mould away by using a horticultural oil or insecticide. One the insects are gone, it’s very easy to get rid of any mould that’s on the leaves by washing it away.

Euonymus don’t just suffer from diseases but they are also targeted by insects known as scale. Scale are tiny insects that feed on sap, either by sucking at the leaf or stem of plants.

Scale is by far the most common problem for euonymus plants. Male and female scales will cover the plant and the females will lay eggs on it. This causes the leaves to develop yellow spots and if the infestation is heavy enough it will result in the branches dying off and possibly the whole plant.

There are certain species of euonymus, such as Euonymus fortunei ‘Acutus’ (also known as wintercreeper) that are resistant to scale, so you might consider planting these if you don’t want to deal with the problem.

If you notice scale beginning to appear on a plant then if it’s only a light infestation, you might be able to simply scrap the insects off the plant. You can also use horticultural oils as well as insecticides to kill scale off.