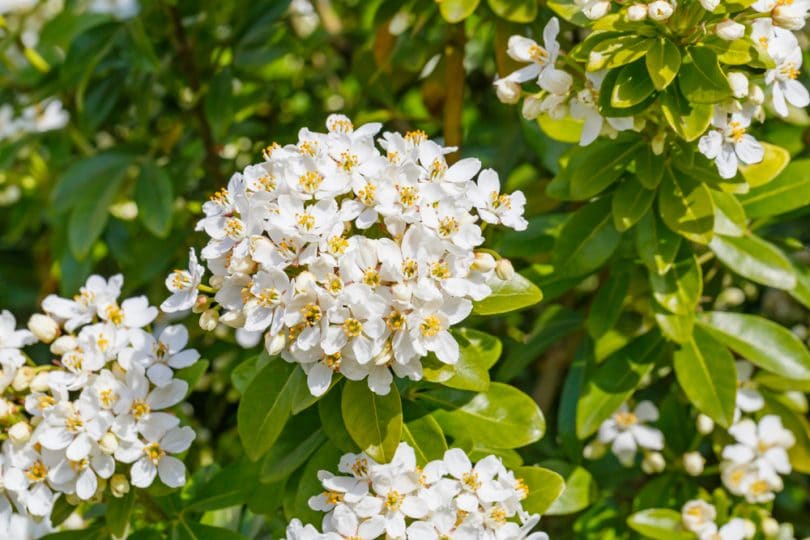 The plant flowers in spring, and sometimes again in autumn, so it’s a great way to add colour to your garden over multiple seasons. It makes a pretty, ornamental addition to garden borders and courtyards, and looks good in combination with other flowering plants, such as geraniums and irises.

It is a hardy plant, and relatively easy to grow in the UK, providing you have a sunny location that’s sheltered from the wind. It is drought tolerant and requires very little maintenance once established.

If you want to add this sweet-smelling shrub to your garden, check out our full Mexican orange blossom care and growing guide below. We’ve included everything from ideal growing conditions and methods of propagation, to pruning requirements and common pests.

Choisya ternata originates from the south-west of the United States and Mexico – which is where it gets its other name, ‘Mexican orange blossom’. It is thought to have been first introduced to Europe in 1826.

The plant is part of the Rutaceae family, and there are several additional cultivars, including ‘Sundance’, ‘Moonshine’, and ‘Brica’. The ‘Aztec Pearl’ variety is a smaller cultivar, with finer foliage.

It is a medium-sized shrub that grows relatively quickly, reaching up to 2.5 metres in height, and approximately 2.5 metres in spread – although smaller growing varieties are also available. It has a round, bushy shape, and is generally grown as an ornamental plant in borders and rockeries.

Choisya ternata is evergreen in most climates, with glossy, dark green divided leaves, which grow in 3 leaflets. The ‘Sundance’ variety has attractive lime green to yellow foliage, which looks its best from March to November.

The shrub also produces small, star-shaped white flowers, which appear in spring, usually around April and May, and sometimes again in early autumn. The flowers have a subtle pink tinge and a sweet fragrance that’s attractive to pollinators, including birds and bees.

Despite its name, the flowers do not smell strongly of oranges, but rather have a subtle citrus scent. The blossoms do, however, look similar to those on the orange plant.

Being from Mexico, choisya ternata is used to growing in full sunlight, so try to find it a sunny spot in your garden. If necessary, it can tolerate partial shade, although this may limit flowering. It doesn’t like to be exposed, so look for an area that’s sheltered from the wind by trees or a fence.

The plant can tolerate temperatures down to -10°C, but will need to be protected if temperatures drop to -15°C or lower, as this can cause the plant serious frost damage. For this reason, it is best suited to growth in parts of the UK with a milder climate.

It will grow in most soil types and pHs, but prefers the soil to be fertile, and it must be well-drained, to prevent root rot. During the first year, you should water the soil regularly, to prevent it from drying out. Use of high potassium fertiliser is also a good idea upon planting, to encourage root growth.

Once established, its warm and dry natural habitat means the plant is tolerant to drought, and should require very little watering, except during extremely dry periods. It is generally disease-free, and resistant to rabbits, although it may occasionally suffer from pests, such as snails and glasshouse red spider mite.

Mexican orange blossom flowers in spring, and the white, star-shaped blooms will often appear again in autumn. The plant generally doesn’t need any fertilising in order to produce its flowers, although it won’t hurt to add a dose of blood, fish and bone in spring.

Choisya ternata is a low-maintenance shrub and requires limited pruning once established. If you do want to trim it back, the best time of year to do this is in late spring, immediately after flowering.

Use long-handled loppers to conduct a light pruning, removing any dead, damaged or diseased shoots, and deadheading any old flower heads. Aim to trim back approximately 30cm of the flowering material, as well as any frost-damaged shoots at the base.

Pruning at this time should encourage a second flowering in late summer or early autumn. If necessary, you can also take this opportunity to re-shape the shrub into the desired form.

You can plant choisya ternata at any time of year, except winter, or when there is frost on the ground. The best time to plant is usually considered to be late spring or early autumn – allowing you to avoid frosts, but also the heat of summer.

When planting, you should try to choose a sunny location, that’s sheltered from winds. Allow plenty of space for the plant to spread out, bearing in mind that some varieties will grow to 2.5 metres high and wide.

Upon planting, add a high potassium or blood, fish and bone fertiliser to the soil, to give your Mexican orange blossom the best possible start, and encourage root development. Water it well, and keep the soil moist during the first year, until the plant is established.

The natural habitat of Mexican orange blossom is (unsurprisingly!) Mexico and south-western United States – including Arizona, Texas and New Mexico. Due to its natural habitat, the plant favours a warm, dry climate for growing, and can tolerate periods of drought.

It will grow in most soil types, although not one which is too acidic or alkaline, and it prefers a fertile soil. The soil should be moist, but not waterlogged, as this can cause root rot.

Taking semi-hardwood cuttings is considered to be the best and easiest way to propagate Mexican orange blossom. Cuttings can be taken in late-summer to mid-autumn, when there should be plenty of current-season shoots, with hard bases and soft tips.

Use sharp secateurs to take the cuttings, and aim for lengths of 10 – 15 cm. Take the cuttings in the morning, and make the cut below a leaf node. Plant them out straight away if possible, and certainly within 12 hours.

To plant, dip the base in a rooting hormone to help stimulate growth, and place into a cuttings compost. Keep them warm, well-ventilated and moist (but well-drained), until the roots take hold, and make sure to remove any dead or diseased material regularly, to help prevent fungal moulds.

If you prefer, it is also possible to propagate Mexican orange blossom from seed. To do this, harvest the seeds in spring, and plant them directly into a peat-based potting compost. This should be in a small container, with good drainage.

There are not many diseases to be concerned about with choisya ternata, but it is vulnerable to a few common pests, including glasshouse red spider mite, capsid bug, slugs and snails.

Snails will eat the foliage of plants, causing obvious holes and damage. They can be controlled by setting traps, or picking them off by hand, and then removing them from your garden. You can also use slug pellets or barriers to repel them.

Signs of glasshouse red spider mite include a pale mottling on the leaves, and leaf dropping, usually from March to October. You may also see evidence of the mites themselves, including tiny yellowish bugs, white skins and eggshells. In extreme cases, an infestation might even cause the plant to die.

Glasshouse red spider mite is caused by warm and dry conditions, such as those found in a greenhouse. Help to prevent it by giving your plants plenty of space to grow, so that air can circulate, and spraying the foliage with water.

If your plant suffers an infestation, you can treat it with biological controls, by introducing a predatory mite or midge to the environment. Alternatively, you can use a specialised pesticide, providing that the plant is not in flower, so it will not affect pollinators.

Can I move my Mexican orange blossom bush?

It should be relatively easy to move a Mexican orange blossom bush if required. When doing this, you should exercise care when digging out the roots, to limit potential damage to the plant. If the bush is large, you may need to enlist the help of a friend to move it.

When is the best time of year to prune choisya ternata?

The best time of year to prune choisya ternata is in late spring, after the flowering period. This will allow you to deadhead the dead flowers, as well as remove any diseased or damaged shoots, or frost-damaged stems at the base of the shrub. It’s best to do this using a saw, or long-handled loppers.

Is choisya ternata an evergreen?

It is evergreen in most climates – however, it may lose its leaves in winter if planted in colder or more exposed areas. The leaves will be various shades of green, depending on the variety you are growing, and will look their best between March and November.

Why is my choisya ternata turning yellow?

There are a few reasons why your plant may be turning yellow. It’s worth noting that the leaves of some varieties, such as ‘Sundance’ are yellow when new in spring, and turn yellow again in autumn. Outside of these times though, yellowing leaves could be a sign of undesirable growing conditions.

To tackle yellow leaves, you can try feeding the plant with fertiliser or transplanting it to a sunnier location. One of the most common causes of yellow foliage is poor drainage, so make sure the soil is not waterlogged.

Can you grow choisya ternata on a slope?

The plant can be grown in most soil types and positions, providing it’s not waterlogged. There is therefore no reason why it cannot be grown on a slope, as long as it’s not at the bottom of one, where the water collects.

Can the plant be hard pruned?

Choisya ternata does not generally need to be hard pruned – a light pruning to remove old flower heads and damaged shoots should be more than sufficient.

However, if you need to hard prune your shrub, to re-size or re-shape it, it will tolerate being pruned back to the ground – just bear in mind that flowering will be affected for the coming seasons.

Will choisya grow in shade?

Being from Mexico, choisya ternata prefers a position in full sun if possible. However, it will tolerate partial shade – just make sure that the location is sheltered from cold winds.

Can you grow choisya ternata in a container?

It is possible to grow the smaller varieties in a container. Make sure that the pot is large enough for the roots to spread out, and that there are plenty of holes in the bottom, to ensure sufficient drainage. Pot-grown plants will need to be watered regularly.

Growing the plant in a container is a good option in colder and more exposed climates, as you can move it indoors during winter, to protect it from frost damage.