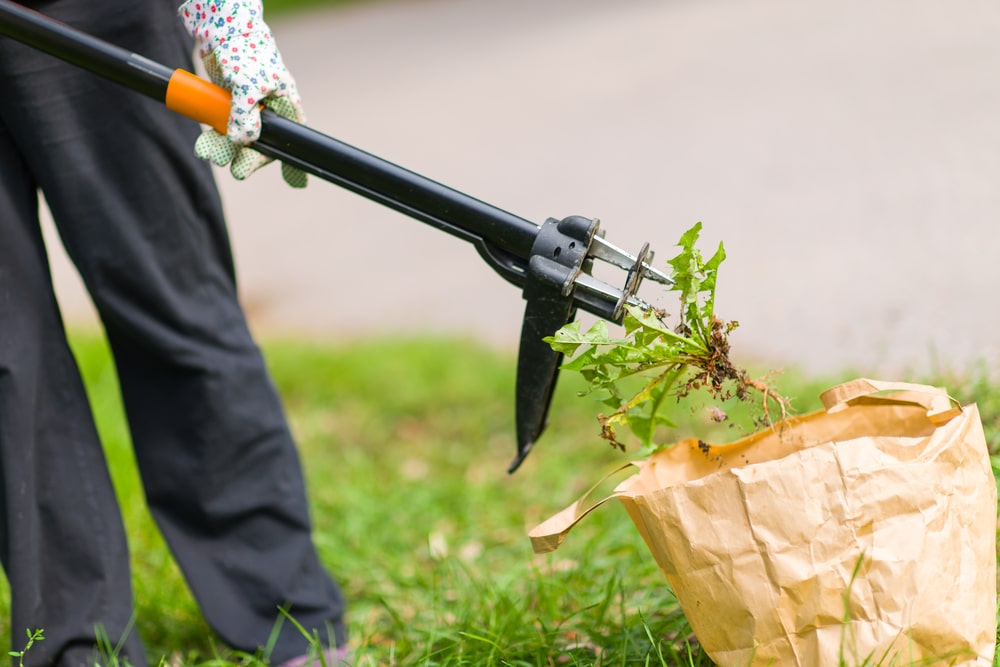 The scourge of gardeners everywhere, weeds can be pretty robust and difficult to remove – especially those with long roots such as dandelions, which penetrate deep into the ground.

It just happens to be the reason why there is such a huge selection of weed pullers on the market right now.

Certainly, in these ecologically-minded days, weed killer has gone out of fashion. It has too many side-effects for most gardeners, including toxins potentially destroying much-loved plants – not to mention, insects, wildlife and even in some unfortunate cases, pets.

Another method of getting rid of weeds is to cut them down whenever they appear but all this does is temporarily rid the surface the garden of the offending plant, leaving their roots to re-establish themselves. This can mean that the following spring and summer another flowering weed might appear.

This is why most gardeners these days will opt for a weed puller. Today’s pulling tools are more ergonomically designed than previous versions. By this we mean they exert less – or no – pressure on the knees and lower back. That’s because they have been designed for the gardener to use while he or she remains standing.

In this review we have four such weed pullers; only one involves having to kneel.

Our top choice of weed pullers which don’t require much effort to use just has to be the Fiskars Xact Weed Puller. Measuring one metre long and 30 cm in diameter, it is constructed from stainless steel with a plastic fibreglass handle. The body is coloured black and has orange trim, making this telescopic weeder an attractive looking tool.

Once the foot peddle is pressed the tool digs into the ground and traps the root of the weed between its claws. When extracted from the ground, the tool’s claws open by means of a pressing mechanism on the handle. The weed is then deposited in a bin or waiting wheelbarrow etc. The movement requires no bending or kneeling, making it a good buy for those with mobility or joint problems.

The Fiskars Exact Weed Puller is good with weeds measuring up to four cm in diameter and with roots growing a maximum of 10 cm into the ground. It is especially effective at getting rid of weeds such as dandelions, thistles, nettles and other root crops in loose soils, a vegetable garden or a lawn. It is best put into use the day after it has been raining, when the soil still a little moist.

The tool we are most impressed with this week in terms of effectiveness, quality and value for money is the Spear & Jackson Select Stainless Weeder and Fulcrum.

A well-known global brand, Spear & Jackson have been around since the mid-18th century and have a reputation for quality. Their Select Stainless Weeder and Fulcrum is one of the latest products in their weed extraction portfolio. And it certainly doesn’t seem to be one to let the side down.

This is a smart, hand-held weeder with two prongs, and which are designed to trap the root at either side. The weed is pulled out by the gardener pressing the handle of the weeder down towards the ground so that the curve supports the movement. Excellent on grass but not so good on a pebbled driveway or other areas where weeds are growing in loose stones or other materials, such as bark.

The Select Stainless Weeder and Fulcrum is best used on dry ground since wet grass or soil will result in the fulcrum (a semi-circular piece of steel half-way down the prong handle shaft) sinking and losing leverage. If this does happen it’s best to just use the prongs to poke directly into the root and keep the fulcrum horizontal before pulling the weed out. In very dry ground pushing in can sometimes cause the root to snap leaving some of it still in the ground.

Many gardeners have found this item particularly good at extracting weeds sitting close to much-loved plants that it’s not a good idea to disturb.

A sturdy weed puller which works well in all weathers

Looking a little like the devil’s fork, this Orientools Weed Puller has four stainless steel claws, an aluminium handle and a foot pedal. Measuring 103 cms in length, it allows the user to stand when pulling out weeds.

The foot pedal can be adjusted to match the slope of the ground. The user applies pressure on the pedal then pushes to slide the steel claws into the ground. These grab the weed, at which point you tilt the puller to one side and extract the weed before releasing and setting it aside.

The Orientools Weed Puller is good for dealing with a number of different weeds, including dandelions, thistles and other invasive species with relative ease. As a result, it’s possible to keep pulling out weeds for longer than if you have to kneel or constantly bend over.

A tough steel weed puller which can withstand a lot of exertion and pressure. It’s also a good all-weather garden tool.

With prongs around three inches long, the Garden Gear Long Handled Claw Grabber is lightweight and easy to handle – despite being produced from stainless steel. Designed to allow the user to stand when using, it helps those with joint difficulties and lower body joints in particular, such as the knees and hips.

The user places the tool over the weed and then presses the footplate. In doing so the claws are pushed into the ground. Tilting the Garden Gear Long Handled Claw Grabber then allows the claws to grab the weed and its roots before pulling up. Good at dealing with a number of weeds and their roots and particularly effective of ridding sandy soil of ragwort.

The AMOS Weed Twister is very good at removing the likes of dandelions, thistles and other weeds with strong roots, as well as bindweeds, cleavers and even small saplings.

Like many of the other weed pullers here it involves standing when in use so saves tiring the back and aggravating the knees. It measures 100 cm in height and 21.8 cm in diameter. The four prongs are long at 7 cm each.

This item is produced from a mixture of aluminium and plastic. It has an easy-eject mechanism for releasing the weed once it has been pulled out of the ground. The toot of the weed is accessed by thrusting the weed puller into the ground with the horizontal bar near the top, at which point the prongs grab the root. A slight twist and the entire weed (ie plus root) is extracted. It is released by pressing down on the bar again. The AMOS Weed Twister works best after it has been raining or the soil watered.

Weed pullers can be an effective, natural way of removing unwanted weeds from your garden or lawn. Unlike when using weed killer the extraction of weeds by using a weed puller doesn’t leave any toxic chemical residue around to potentially harm other plants and shrubs. And pesticides won’t be washed into a local stream either – where they could potentially hurt farm animals and family pets.

Deep-rooted weeds can pose a tough problem though and they may have to be kept an eye on all year round. That’s because weed pullers may not be long enough to get to the bottom of the root, with the result the weed keeps growing year after year in spring and summer.

In the main though, weed pullers do work effectively – especially as they are able to get rid of weeds forever. Not only that but by pulling out the weed (rather than using toxic chemical weed killers) it actually helps the soil to regenerate…

How To Use A Weed Puller Effectively

These days there are a variety of different types of weed pullers. Some can be used while kneeling, others with the user in a wheelchair and yet other varieties when standing. In fact, such is their success that the latter has become the most popular type of weed puller in the UK.

It’s not difficult to understand why when you realise one of the benefits of an upright weed puller is that it doesn’t put any pressure on the lower back meaning there is less chance of the gardener ending up with a sore back and having to put the rest of the weeding on the back boiler for several weeks or until the pain has gone for good. And at which point, those existing weeds will have become even more entrenched in the soil and twice as difficult to remove.

But then, regardless of which particular weed puller you happen to be using at the time, the main concern of every gardener should be that the prongs of the tool are long enough to get the bottom of the root. Otherwise, as we mentioned above, the weed will be able to flourish again.

When long enough the prongs push into the ground and grip the bottom of the weed tightly before being pulled out again and – hopefully – taking the weed and the roots in their entirety with it. The weed and roots are then removed and dumped in a nearby bin, never to be seen again. Fingers crossed.