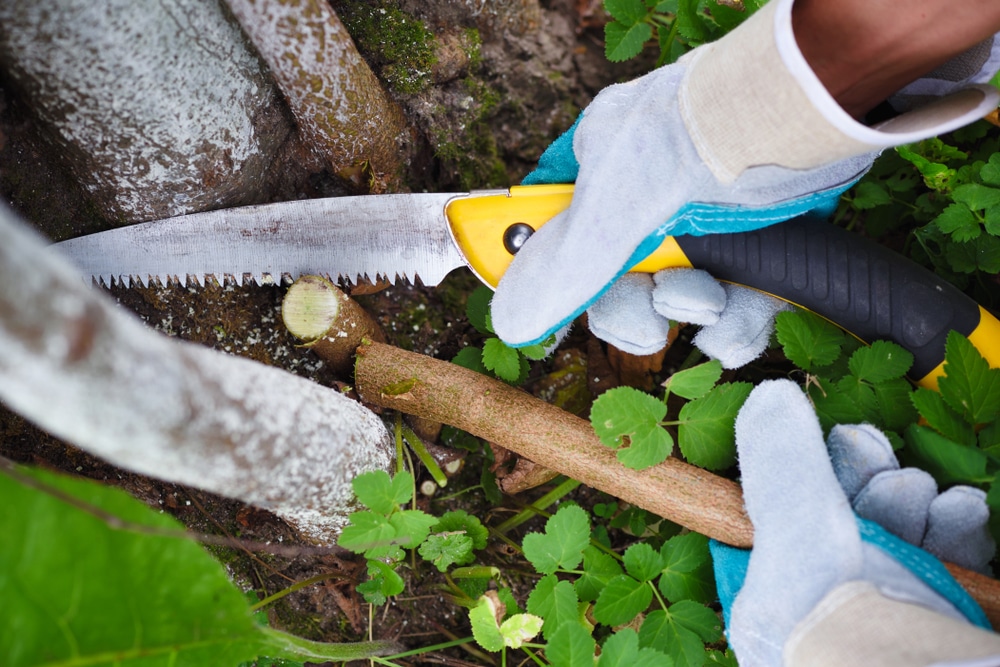 The pruning saw is a specialised, fit-for-purpose gardener’s tool used to prune branches from trees and bushes. Pruning saws fill the space between loppers and two-man saws or chainsaws. In general pruning saws are ideal for sawing branches 5 to 10 centimetres thick though some saws can tackle even 20-centimetre-thick limbs.

There are a huge number of advantages to pruning your plants:

Cutting off a limb or a branch is traumatic to the tree and leaves a ‘wound.’ In order to have the least impact on the tree, you need to prune with a high-quality pruning saw and use the correct technique (described underneath).

Pruning saws are available in different styles and with different features, for example, straight versus curved, fixed-blade versus folding, fine teeth versus coarse teeth, and so forth. This variety in style and features results in pruning saws being either well-suited or ill-suited for a particular purpose. For example, folding pruning saws are very portable and are not hazardous to carry around, but they are not ideal for cutting very thick branches or hardwood branches.

Underneath we evaluate five of the best pruning saws available in the U.K.

Wilkinson Sword’s pruning saw really ‘bites’ into the wood such that it allows you to maintain the saw’s grip with the barest of effort, compared to most other pruning saws. It makes clean cuts, has the smoothest of strokes and the teeth on the 25-centimetre blade are unbelievably sharp. It saws through even 20-centimetre thick limbs with relative ease, and quite rapidly at that.

It cuts on the pull stroke which tends to promote control, decrease slippage, and reduce the possibility of the blade sticking or snagging.

The thin blade reportedly flexes but that is to be expected if an incorrect technique is used, that is, the exertion of downward force on the push stroke. (A pull-stroke blade will not flex if you exert downward force and make the cut while pulling, and if you push the saw while maintaining only sufficient force to maintain the blade’s grip in the cut and only to get into position to begin the sawing pull-stroke again.)

The ergonomically designed handle is easy on the hand and the arm – promoting a firm grip and good control. The only niggle we have is that the saw could use a finger guard between the handle and the blade.

Comes with a holster you can attach to your belt. The holster is a welcome accessory as it enhances safety and allows for easy carrying, a real plus for a full-sized fixed-blade saw.

At its price-point, the super quality one gets also makes this Wilkinson Sword winner a super value for money.

An easy top pick, this is a pruning saw for everyone from the gardening greenhorn to the parkland professional.

Attractive styling and nifty design make the sale, provided you don’t subject it to tough jobs!

SEEYC folding hand saw brings a lot to the table at its price. For a folding saw, it is unusually sturdy and firm yet it is light and compact at 24 centimetres folded. The 20-centimetre blade with triple-cut teeth is made of hardened manganese steel.

This is not by design a dedicated pruning saw; it is an all-purpose hand saw that can be used to prune about 8-centimetre branches as well as saw other objects. Portable and compact, SEEYC’s folding saw is ideal for camping and many other outdoor as well as indoor uses. That said, its design and balance make it a good bet for smaller pruning tasks but not for tackling tough sawing jobs.

The sharp blade saws cleanly and easily on the pull stroke with a fairly good ‘bite.’ At its surprisingly low price, it is quite an excellent tool so long as you don’t try to saw a 15-centimetre hardwood limb.

As with the Wilkinson Sword saw, some users complain that this saw’s blade bends. This complaint is mostly due to incorrectly using this pull-stroke saw by trying to saw on the push stroke. The push stroke should be made only to return the saw into position for the cutting pull stroke.

The ergonomic ridged handle is very comfortable to hold and allows a firm grip. The blade locks into place with a gear lock and folds fully into its handle.

The saw weighs about 250 grams. It comes with a replacement or refund guarantee.

This kit is a runaway winner for our value pick and is an excellent choice for the bargain-hunting hobbyist.

Rugged yet ultra-light and ultra-compact, a defect and hazard prevent this Laplander from fully living up to its reputation.

Sweden’s Bahco makes an ultra-compact all-purpose folding saw at just 19 centimetres folded and a touch under 200 grams. Its weight and dimensions make it a favourite among bush crafters, and all the more so because it is a rugged little baby. These same attributes also make it very manoeuvrable and usable in small, tight spaces.

The 19-centimetre Sandvik blade is very sharp, has good ‘bite,’ and has remarkable sawing ability, making easy work of even 18-centimetre thick branches and putting some dedicated pruning saws in the shade. The thicker blade with bi-directional teeth saws on both strokes (pull as well as push) but there is a small degree of flex and bend. Moreover, its non-stick coating really works because, unlike most other saws, this one does not stick even in gummy woods.

Bahco Laplanders’ sharply curved handles are a matter of taste; some like them and others don’t.

Unfortunately, on quite a few units the safety lock is defective and fails to lock the blade in the open or closed position allowing it to swing open or shut, thereby creating a genuine hazard. Adjusting the blade-retention screw or unscrewing the blade entirely and re-attaching it carefully usually solves this problem, not that it should exist in the first place.

The forest green and black colours are poorly chosen because if this saw is laid down on grassy or scrubby ground, especially at dusk or later, it blends in and becomes hard to sight.

The Laplander 396-LAP is not value-priced but it is not very expensive either. A good choice for bush crafters and also peripatetic landscapers.

Plenty to like in this folding pruning saw, with a few clever design elements, competitive price, and excellent customer service all standing out.

Though Davaon’s folding saw is a multi-purpose product, it is primarily meant to saw through woods and is targeted equally to gardeners and outdoorsmen.

The 18-centimetre carbon steel blade can saw branches even up to 12 centimetres thick though it is not really geared for heavy-duty pruning or sawing through hardwoods. The blade is coated to minimise resistance and promote smooth sawing.

Davaon pruning saw cuts on the pull stroke. While some users complain about the blade flexing which is usually caused by incorrectly exerting downward sawing force on the push stroke on this pull-stroke saw, a few users have encountered a more legitimate and serious problem of the blade snapping. Avoid this problem by not exerting lateral force.

The blade not only locks in the closed position, but it also locks in a number of different open positions, including the usual straight position. This clever design allows you to set the blade at an acute angle so you can prune a branch amid a tangle or at a slightly obtuse angle to comfortably saw a branch against a fence.

The handle’s design is top-notch; the rubberised material and ridged handle facilitate an iron grip. In our view, the gentle curve on the handle is ideal.

A recurring problem with this saw is that the retention screw comes loose and falls. Simply periodically check it for tightness.

Davaon provides a money-back guarantee and their responsive customer service sets the standard.

This kit is as much ‘at home’ in the garden as it is at the campsite and neither the casual gardener nor camper can go wrong with it.

Now and again a manufacturer’s assertion is spot on, as is Draper’s of “super sharp teeth” on the 23-centimetre blade of this pruning saw. Confirm at your peril! These teeth make sawing relatively effortless. It saws on the pull stroke as has become the norm.

This pruning saw easily does away with 10-centimetre-thick branches and, with a modicum of effort, is good for 15-centimetre ones.

For a folding saw, this Draper kit is bigger than usual so it flunks the portability and compactness sweepstakes. However, the somewhat longer-than-usual handle allows for a two-handed grip when necessary. The handguard is a very thoughtful design element; it protects your knuckles from scraping against a tangle of limbs or smashing into a trunk if the saw slips.

We especially like this saw’s gently arcing shape from the base of the handle to the tip of the blade as it fosters a natural sawing motion ideally suited to pruning branches.

The main concern is that the blade is not perfectly firm, demonstrating a trace of wobble and looseness, which can put off some users.

This Draper saw’s folding mechanism is particularly smooth and reliable. The mechanism that locks the blade open or closed is especially reassuring.

Falling into the category of “nothing to look at,” this utilitarian bit of kit is not for fashionista gardeners but for traditionalists who value old-fashioned qualities. Moreover, it does not have any peculiar problems of the kind that plague a couple of big-name makers’ folding saws.

So well-made a proper pruning saw at so low a price represents a really good deal.

How To Use A Pruning Saw Effectively

The correct point to prune branches is just outside the collar, which is the knobby ring at the join of the branch to the trunk (or limb). However, beginning the pruning cut, especially for a sizeable or heavy branch, right by the collar is a rookie mistake. If this is done then, at some point while the cut is still in progress, the uncut part of the branch will not support the branch’s weight causing it to suddenly shear off and fall or dangle by a strip of bark. Such a mishap would increase trauma to the tree and leave an imperfect ring on the trunk or an ugly scar.

To prune safely and correctly, use the Three-Cut Technique. Make the first cut about 30 centimetres from the trunk. Saw upward from the underside of the branch to about one-third of the branch’s diameter. Make the second cut about five centimetres outward from the first cut, sawing downward as normal. As you keep sawing, the branch will snap off cleanly at the first cut, leaving behind a stump. Make the third and final cut just outside the collar, taking care not to cut into the collar. Do not make this cut flush against the trunk; also, as you saw, angle the cut outward.

Before you begin to saw the final cut, consider making a notch to mark the cut so as to have a groove to guide your initial sawing strokes, and to do away with the possibility of the saw slipping.

For your tree’s well-being, before you begin to prune wipe your saw’s blade with diluted rubbing alcohol, and for your saw’s well-being, after you finish pruning clean your saw with a soapy solution and wipe it dry. And for your well-being, wear goggles, gloves, and, above all, gardening shoes with reinforced uppers and toes.