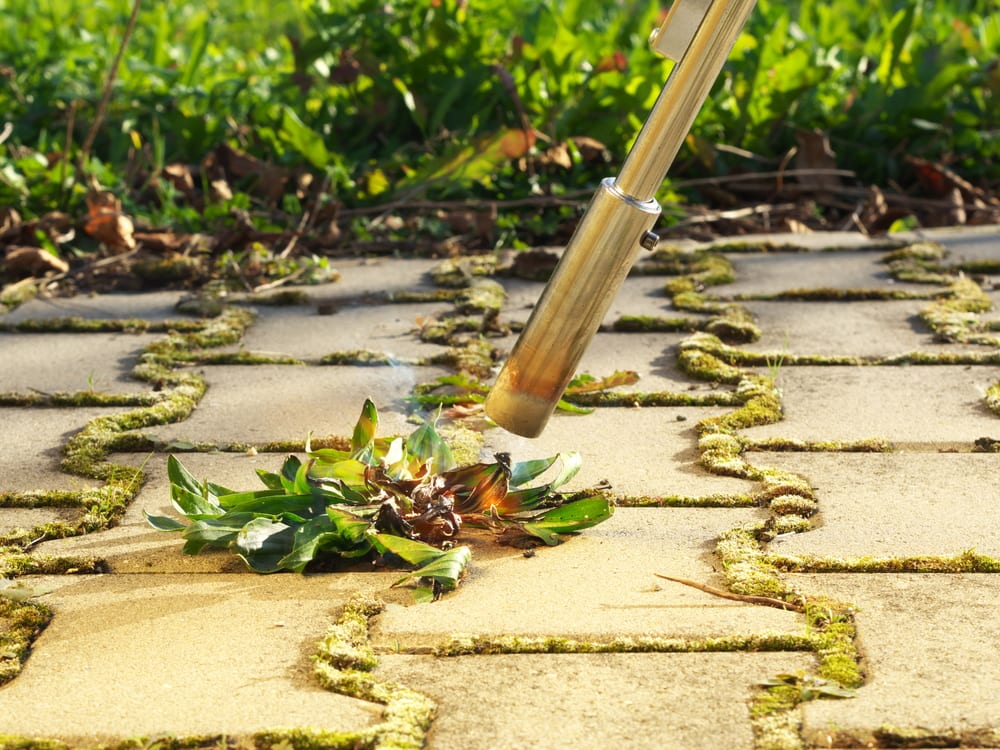 How do you get rid of nuisance weeds without weeding and without ‘herbiciding’?

You’ve got weeds through the pavers, and weeds by the flower bed. Now you don’t want to give your temperamental back any excuse to start whining. And you don’t want to run the risk of glyphosate-based herbicides harming your plants. Not a problem. An electric weed burner is just the ticket for you.

Traditional weed burners run off propane or butane which means they need to be connected to a gas cylinder which you need to keep at hand. Newer electric models are rather more convenient. Just plug one in and start zapping those weeds! Apart from weeds, you can also use these tools to get rid of moss and grasses sprouting through your patio slabs and concrete blocks.

An electric weed burner has a heating wire that generates high heat inside its body. A fan then blows super-heated air, which is at a temperature of over 600 degrees centigrade, through the nozzle. When this super-heated air is focussed via the cone attachment on a weed (or any small plant) for about ten seconds, it degrades or destroys the weed’s internal cell structure causing the weed to wither and die in a couple of days. The weed does not need to be singed, smoked, or set on fire, though not infrequently it is.

Electric weed burners are versatile and can rightfully be called multi-use tools. Besides using one to zap weeds, you can use it in the summer to light your outdoor grill, and in the winter to de-ice your frozen walkway. Indeed, nearly all models are supplied with two tip attachments; a cone attachment for weed burning and a flat wedge for lighting grills. Actually, this second attachment is useful for getting at weeds in crevices and corners.

When using electric weed burners it is good practice to run the unit at the low-temperature setting for a minute before shifting to the high temperature, and also to ‘downshift’ to the low setting after you have finished using it, and letting it run on low for a minute before switching it off. And it is even better practice not to touch the very hot attachment (or the nozzle) for quite some time after you have finished using it!

These relatively new tools have an input power almost ‘standardised’ at 2000 watts. They also have an ergonomic and functional handle with a rest-cum-aperture near the front. So as to prevent the cord straggling on the ground it can be looped through the aperture and then threaded through the loop. And when you want to set the weed burner on the floor to cool down after usage, it can be kept straight and horizontal by placing it on the rest.

Other than that, various brands and models are distinguished by fine differences that we take into account in our evaluations below. The all-important factor of price is certainly not a ‘fine difference’ but in a few other respects, such as length of the tool and maximum temperature, the differences are indeed tight. These factors include build quality and the overall robustness of a tool that is meant for repeated outdoor usage. Though distinct features are uncommon, we highlight these where they occur, as we do a freebie.

Finally, performance and reliability are the most important criteria of all in this set of reviews, and the products have been selected and graded primarily on these two factors.

Without setting the world alight, NASUM’s weed burner sets weeds alight; though costly it is both consistent and durable, and edges the competition.

NASUM’s electric weed burner has an on/off switch on top of the body with 2 settings, 60° and 650° centigrade.

It emits potent heat to the extent that the targeted weed starts smoking and can even get charred. Weeds zapped with this kit die in a couple of days.

It is not a temperamental product and works time and time again. Unlike a few other products, it can be used for long spells, up to an hour or even two.

At only 1.8 metres its electrical cable is way too short. It comes with a cone attachment and a wedge attachment.

NASUM’s weed burner is reasonably robust and quite well made and is more durable than most others. However, it is distinctly costlier than almost all others reviewed here.

The unit is 101 centimetres in length which is just about right for persons of average height. It weighs a very light 1 kilo.

With little to choose between competing products, we feel NASUM’s product edges the others on performance and reliability and this is why it nicks our Best Pick slot.

‘Fit for purpose’ defines Groundlevel’s very cheap weed burner; with price its strongest suit, this kit does the job and proves itself a top value.

A procurer of value-for-money garden accessories, Groundlevel markets a generic electric weed burner that is as popular as it is inexpensive.

It too suffers from a very short 1.8-metre electric cord. It is supplied with a cone and a wedge attachment.

This is an inexpensive, generic product and defective pieces are bound to creep in but most units work very well. They emit more than enough heat and kill weeds quite reliably.

The cheapest weed burner on the market, Groundlevel’s kit is an amazing value for money. More or less holding its own in performance while heavily beating out the competition on price, it is a deserved Value Pick.

Though a few units fizzle out, intense heat is Kinzo’s weed burner’s calling card as this kit justifies its higher cost by laying weeds to waste.

Kinzo is a gardening equipment and accessories brand owned by Dutch global trading giant EDCO. This company’s electric weed burner, sold through URBNLiving, was one of the first ones to market.

It has two settings, 60° and 650° centigrade (incorrectly displayed as 600°). It is supplied with a cone and a wedge attachment.

This weed burner, costlier than most others, turns weeds to toast and does it reliably again and again, requiring less time than most other weed burners. It emits quite intense heat and can even set weeds and other small plants alight.

Unfortunately, a small proportion of units are defective and these just up and die.

Kinzo’s weed burner beats out its competition in length of cord, boasting one that is 5 metres long on most pieces.

This name brand – relatively speaking – tool is costlier than others but is also of better build quality; it is more well-machined and is better finished than other weed burners.

It is 95 centimetres long and weighs only 1 kilogramme.

Parkland’s weed burner is of variable quality; though the cord is a joke and many pieces are good enough, the best units are weeddom’s nemeses.

Curiously, the weed burner that has a maximum temperature of 600° centigrade which is 50° lower than others is also the one quite often to generate very intense heat, enough to set weeds, plants, and wood alight.

The term ‘quite often’ is a necessary qualifier because pieces are of variable quality as some emit ‘run of the mill’ heat while others emit higher heat. But for those that do not emit really high heat, all you need do is hold the burner to the targeted weed for fifteen seconds instead of five.

Some units are defective and these shut up shop.

It comes with a cone and a wedge attachment. The cord is only 1.3 metres. That’s a fail!

If you get a defective item you’ll be ruing your purchase, if you get one with that ‘run of the mill’ heat you’ll be trundling along killing weeds, and if you get one of the winners you’ll be blitzing weeds right and left.

Parkland’s kit is 101 centimetres long and is a comparatively weighty 1.5 kilogrammes.

A generic weed burner of solid quality, Martclix’s offering contains some defective pieces but in the main, units are consistent and reliable.

A generic clone of ‘name brands’ (comparatively speaking!), Martclix’s offering brings the same design and features, and throws in a most apropos freebie: a sturdy little plastic gardening trowel.

It emits enough heat to reliably and consistently kill weeds without setting them on fire but by singeing them. In two days the browned weeds can be scraped away. Or use the supplied gardening trowel to dig out those dead weeds!

A very small percentage of items are defective, and these go to weed burner heaven before their appointed time.

It weighs a middling 1.26 kilogrammes.

Yes, they are fit for purpose (but no more). Assuming you have a good unit, each small weed or unwanted grass that you zap will be fatally injured and will soon die. Sometimes a weed burner will singe a weed and set it smoking or even set it alight if you hold the nozzle to the weed for more than ten seconds or so, but this is not strictly necessary to kill a weed.

An electric weed burner is meant for de-weeding small, localised weeds from, say, patios, steps, walkways, and the edges of flower beds.

There is a limit to the size and type of weed it can kill. It would be too much to expect an electric weed burner to eliminate large, overgrown weeds. Also, strong, tough weeds like mare’s tail and ivy do not go down easy no matter how you deal with them, and an electric weed burner will probably not bring you much joy against these gorillas of the weed world.

Finally, one must realize that electric weed burners are not any type of herbicide or weed treatment so they cannot stop new weeds from sprouting.

What electric weed killers are just perfect for is getting rid of weeds that sprout up between slabs, pavers and blocks of all kinds as these can be very tedious to remove using other means. They are also ideal for households with pets or small backyard animals that you do not want to harm.

Can They Damage Tarmac?

They can, yes, but you have to actually try to damage tarmac before it can or will do so. Under normal use you would hold the nozzle to a weed or other unwanted growth for no more than ten seconds, and in this very short period of time the heat emitted by an electric weed burner will not damage tarmac.

Now if you hold the nozzle to the tarmac for a good 30 seconds with the switch set to high heat, then you may see some undesirable results.

Are Electric Weed Burners Safe to Use?

Yes, they are quite safe provided you follow some safety rules. Here are some essential dos and donts:–