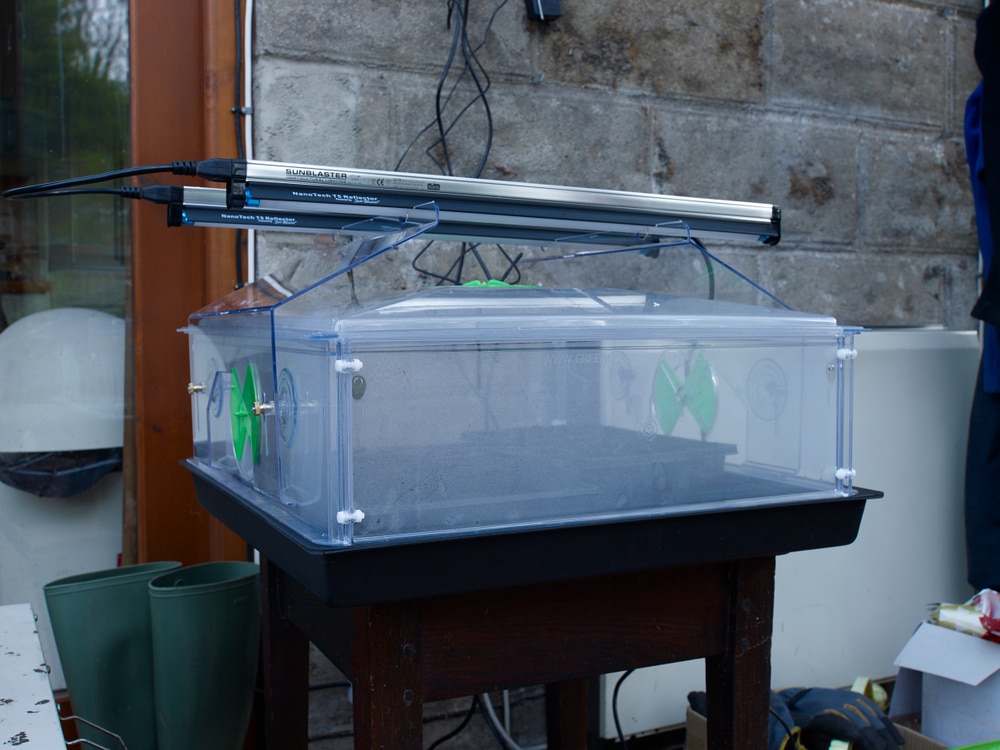 Promote germination and growth of delicate seeds and cuttings in a heated electric propagator, which provides a controlled environment with the ideal temperature, and even humidity and lighting conditions both of which can be fine-tuned. Pamper your precious seedlings – get a propagator!

The heated electric propagator is a heaven-sent for keen gardeners in these cloudy, rainy British Isles. Regardless of cloud, rain, or whatever else, these propagators allow you to get all manner of vegetables, herbs, and even exotic plants going – right on your windowsill.

A propagator comprises of a longish box, usually with separate little containers, be it open trays, closed trays, or pots, inside it. Lids are clear and transparent to allow maximum light and with adjustable vents on the sides or top to control air-flow and humidity. The trick is in the base which is equipped with an electrical heating element. When the unit is plugged in, the base radiates a gentle warmth through to the growing trays. This warmth induces seeds and cuttings to germinate. Not only that, but heat also has an effect on the propagator’s humidity as well.

Most propagators are sub-divided into sections in which a number of smaller trays or containers are tidily arranged. Two propagators may be about the same size but one may have two big containers and the other seven small ones. These variables will play a part in how you can use the propagator. In the first type of propagator, you can plant more seeds in each of the bigger containers and you can allow them more time to develop roots but you are restricted to planting only two kinds of varieties, one in each container, as germination times and growth rates vary widely between plant varieties. In the second type of propagator, you can plant as many different varieties as there are containers and transplant each seedling “on its own time” but you can plant only one or two seeds per container and you cannot give them as much time to grow and develop their roots in a protected environment before they must be transplanted.

Big, little, and medium – heated electric propagators in various sizes and configurations are run through underneath so you can pick the one that is the best one for your needs.

Tried and tested, Garland’s Super7, in spite of the odd quality control defect, lives up to its deserved reputation and delivers consistently happy results.

The heated base has a 13-watt carbon-fibre heating element which is meant to raise the propagator’s soil temperature to 8° centigrade above ambient.

Quality control is dodgy because sometimes a few trays may not have their drainage holes cleanly punched through requiring you to finish the job or sometimes one or more vents may not be adjustable or a vent slider may have come loose.

There is no on-off switch, the same as with most propagators.

However, this propagator works like a charm; it germinates seeds and cuttings very consistently and reliably, including those of exotic varieties. Moreover, the propagator and its components are strong and solid, and there is next to no flex.

Garland’s Super7 gets strong competition from the Britten & James in this review as the two are very similar in layout, design, and specs. Even though the latter may be better overall, it is a new challenger and is an unknown quantity whereas the Super7 is tried and tested, and can be vouched for.  Therefore, it gets the nod as our Best Pick.

Perfectly defining the term ‘cheap and cheerful,’ Garland’s Fab 4 propagator has a squareish orientation and is an ideal starter set for budget buyers.

Evidently designed by Garland for Beatles fans, the ‘Fab 4’ propagator has a more square’ish and boxy shape than most. The propagator measures 38.5 by 24 centimetres and so is not well suited for most windowsills as sills are usually wide and shallow. It is perfect for smaller but deeper sills, and for placing on a stool or a kitchen counter. The height is 15.5 centimetres.

The propagator contains four trays, each with a vented, clear lid. These ‘mini-propagators’ measure 14 centimetres long by 9 centimetres wide. They are 11.5 centimetres high. They are a cut above those of the Super7.

The trays are perforated with drainage holes. The red sliders for adjustment of the vents are not sufficiently firmly fixed. Sometimes they can become loose and even get detached.

The sealed electric base contains a 10-watt carbon-fibre element designed to raise the propagator’s soil temperature by around 8° centigrade.

There is no on-off switch. But plug it in, and this kit just works. The 10-watt heating element raises the temperature enough to make the world of a difference for germination.

Such a nice little propagator at so cheap a price is undoubtedly a standout value for money and has to be a Value Pick in anyone’s book.

An up-and-comer propagator, Britten & James’s kit is as well designed as it is well made; for those who are not swayed by name brands, it may be a best buy.

Britten & James propagator has dimensions of 76 by 18.5 centimetres. It is 15 centimetres high.

The propagator has seven growing trays with clear lids which have adjustable vents. These ‘mini-propagators’ measure 15 by 8 centimetres. They have drainage holes.

The mini-propagators rest on a base tray that is gently heated by a 13-watt heating element that is meant to increase the soil temperature by about 8° centigrade above ambient.

However, it lacks an on-off switch.

The vents are very easy to adjust; combine this with the fact that this propagator somehow induces more humidity than others, and you have a kit that is a top choice for exotic or tropical varieties. That said, this propagator works very well for all kinds of seeds.

In layout rather similar to the venerable Garland Super7, our Best Pick, this Britten & James propagator is of much more recent vintage. Also, this company is a relative unknown where propagators are concerned. However, we feel it is an up-and-comer model that competes strongly for the Best Pick position.

The electric cord is 133 centimetres.

Structured on the principle of ‘less is more,’ Neptune Hydroponics set includes a fibre mat and is particularly good at generating and regulating humidity.

Neptune Hydroponics propagator comprises of a large tray inside which (only) two inner trays are fitted. The larger outer tray has a clear plastic lid that has four orange-coloured ventilation sliders which are very well designed and made.

The whole affair measures 38 x 24 x 19 centimetres. All three trays are made of PVC and the two inner trays have several small drainage holes. The finishing is especially good.

It comes with a removable horticultural fibre mat that is meant to be placed in the outer tray for the inner trays to rest on. The mat’s purpose is to retain moisture.

In this propagator you can put some water in the main tray so that it keeps evaporating so as to bring about a humid internal environment. You can adjust the four vents and thereby fine-tune the internal humidity.

Some units do not generate sufficient heat but those that do are extremely effective at propagation; what seeds may or may not be able to do in soil, Neptune Hydroponics’s propagator makes them do within two or three days.

The electric cord is 180 centimetres.

Stewart’s propagators come in four sizes, ‘Compact,’ ‘Medium,’ ‘Large,’ and ‘Windowsill,’ and in five configurations of which three have heating elements of 8, 22 and 50 watts. Our selection is the ‘Large,’ 52-centimetre size with a ‘rigid crystal styrene’ lid and 22-watt heater.  It is not only very spacious, we feel it is the best overall configuration from among the nearly 20 that are available.

The lid has two good-sized vents with adjustable sliders on the top.

A 22-watt heating mat is sealed inside the insulated base. It is designed to maintain soil temperature between 18 and 23 degrees centigrade or 10 to 15 degrees above ambient. Unlike the other propagators reviewed above, this one is thermostatically controlled (non-adjustable fixed thermostat).

This propagator generates low heat; it is not the right choice for those in very cold climates or those who need a really warm propagator. Though the heating element is 22 watts, bear in mind that this is quite a large, spacious propagator. That explained, in typical cool weather, most units maintain temperature at right around 20° centigrade.

The drawback is that the kit has no pilot light so you cannot be sure if it is on or off.

The overall dimensions of the propagator and its ‘high roof’ give ample room for seedlings to mature to a good healthy size in their ‘incubator’ before they must be transplanted.

The ‘Large’ kit comes with one large internal tray, two small internal trays, and 10 small flower pots. All 13 containers have tiny drainage holes. This smartly-designed set allows you to mix and match trays and pots to suit your growing needs. This is a well-made and robust kit and is particularly attractive. Most importantly, it does the job very well.

It even comes with helpful and interesting instructions.

All said, this set is a really good value for money.

How To Use An Electric Propagator

When Is A Heated Propagator Necessary?

A heated electric propagator is necessary and also very useful when you want to:–