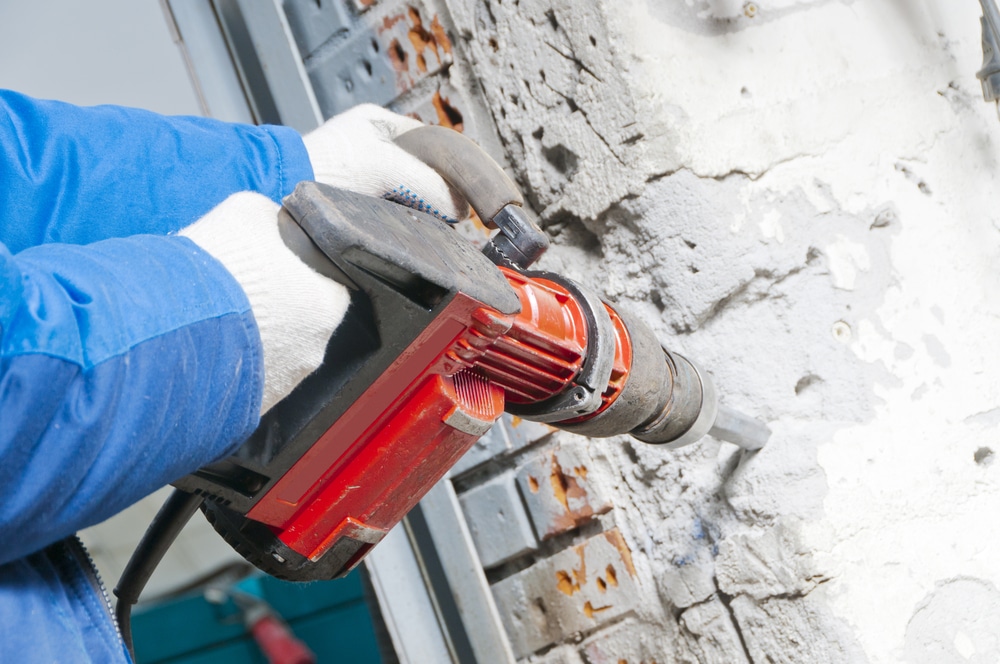 What does ‘DIY’ stand for? Why, ‘Demolish It Yourself,’ of course! That’s how you think if you’re holding a concrete breaker or demolition hammer. These power tools drive a steel chisel up and down very rapidly and forcefully breaking and demolishing whatever it touches.

If you have concrete slabs, driveway, platforms – whatever – that you want gone, just gone, you could rent a concrete breaker or, if you’re loaded, hire a professional outfit. On the other hand, for the cost of a rental you could buy your own concrete breaker and DIY – ‘Demolish It Yourself.’

A concrete breaker or demolition hammer is one of those power tools that you may think you’re only ever going to need once or twice. Be aware though that for the cost of renting one for just three days you can simply buy your own. (And you may not complete your demolition project in three days!)

What’s more, once bought you may well find other uses for it. Otherwise you can always resell it. But not if your neighbour or son-in-law ‘borrows’ it . . . for you’re never going to get back your ultimate boy’s toy!

Seriously, if you’re a homeowner or a gardener, sooner or later you’ll want to rip up unwanted concrete in the yard. An industrial-strength compressor-based pneumatic drill or a hydraulic jackhammer would be too expensive and heavy and also excessive for a home or garden project but an electric or petrol concrete breaker would fit the bill ideally.

Typically weighing 12 to 16 kilos, these machines are heavy and powerful, but they require no finesse and are simple to use. Amateur demolition hammers, be they electrical or petrol, operate on the principle of rapid percussion, driving a hardened steel bit with great force at about 1,500 blows per minute (BPM) to turn concrete into rubble. Of course, you will have to get all the rubble hauled away – but you’ll be able to afford it with the money you save if you buy your own concrete breaker and DIY.

Here’s our top pick from the machines available in the UK:

Not too heavy, low vibrations, good chisels, and earth-shattering performance by a tool more tough than any concrete – the aptly-named Silver ‘Storm’.

Silverline’s SilverStorm concrete breaker has a 1500-watt motor that drives the chisel at 1400 BPMs with an impact force of 45 joules. It works with standard 30-millimetre chisels.

Meant for concrete, masonry and asphalt, with the Silverstorm 263570 you can break up 20-centimetre thick strips of concrete, 4-brick walls, or even 300-millimetre by 600-millimetre granite chip foundations in no time. Keep surprising yourself with what this bad boy can demolish!

The power of the SilverStorm is such that you do not need to exert much pressure at all; simply hold it properly and let its own weight and power get on with the demolition. Notwithstanding its power, vibrations are surprisingly controlled and comparatively damped.

The cushiony-grip handles also contribute to making things easier for the operator. Its side handle rotates a full 360 degrees. Simply turn the plastic knob to loosen the handle’s clamp.

This faultless DIY rig could be used by professionals for medium-duty jobs albeit not for constant, day-in-day-out work.

While the wheeled plastic carry case is far from strong and will break sooner or later, the tool itself is built like a rock – seriously solid and robust.

It comes with two chisels (point and flat; 30 x 410 millimetre), two hex keys, a spanner, and a pair of carbon brushes.

The electric cord is 2.5 metres and the breaker (by itself) weighs 14.3 kilogrammes.

This superlative jackhammer edges out some strong competition as our Best Pick.

Silverline provides a three-year guarantee if the purchase is registered within 30 days.

Though lacking a 3-pin plug and rather rough and ready, Foraver Demolition’s dirt cheap rig does the job so well, it gives the biggest bang for the buck.

Rated at 1500 watts of power, Foraver’s 95-millimetre demolition hammer actually has a wattage of about 1200. We feel that its work or energy spec of 60 joules may be similarly optimistic.

However, other claims are quite realistic. Foraver says that its rig can take care of ‘Concrete, Block, Brick, Tile Stucco, Removing A Foundation,’ etc. and this is correct. This budget kit can break up granite walls, 150-millimetre thick concrete platforms, and even demolish an 18-metre-square concrete patio.

Beginners will appreciate the easy and secure chisel insertion: Simply pull the knob-like lever on the side of the socket and rotate 90° clockwise, remove the bit, insert the new bit, then rotate it anti-clockwise and release it, to lock. Everyone, however, will appreciate the 360-degree rotating side handle.

A good safety feature is the built-in safeguard against no-load operation. If the chisel is not in contact with something or another, the hammer will not start.

This budget rig looks and feels like something that was made in an old smithy. It betrays poor finishing and looks like a basic, old-line tool.

The causes of concern we have with Foraver’s breaker are its plug and cable. It ships with a European 2-pin plug so make sure you have an adaptor on hand, though it would be wise to replace the plug with a proper earthed 3-pin plug for safety – and while at it, check the power cable’s thickness and amperage for sufficiency.

It comes with two chisels (point and flat; 410 millimetre), a pair of carbon brushes, and two hex wrenches – but no carry case! Also included are goggles, mask, and gloves; these may not be of high quality but they are more than serviceable and we appreciate the fact that Foraver includes them.

For all its pros and cons, at the end of the day this rig is a superb buy at its budget price.

VonHaus’s 1500-watt demolition hammer strikes at 1500 bpms and has a work or energy rating of 45 joules.

‘Makes light work of tough jobs’ claims VonHaus, saying that the 15/270 can tackle ‘brick, blockwork, asphalt and concrete.’ If anything, VonHaus is being concise and conservative. It can demolish concrete platforms up to 23 centimetres deep, rip up entire concrete drives, and vaporise concrete slabs as if they weren’t even there.

This kit has a useful 360-degree rotational side handle. On the topic of handles, we have to call out VonHaus’s beast on one or two concerns. The handles are not cushioned, do not absorb vibrations, and vibrations – jolting vibrations – are transferred to the operator. Those with any wrist or back issues should give this rig a pass.

Buyers of this kit should be sure to check the oil and top up as necessary.

It comes with two chisels (point and flat; 30 x 40 millimetre), a wrench, three hex keys (5, 6, and 8), and a pair of carbon brushes. The chisels are of well-above-average quality but the plastic case is far too weak to carry around such a heavy tool; use it as a storage box.

It is worth mentioning that the VonHaus 15/270 ranks in the Top Ten under Concrete Tools on Amazon.

Though ReaseJoy’s concrete breaker is very heavy, is relatively low in vibrations, has a lock button, is durable, and is a brute that simply busts concrete.

Perhaps ReaseJoy is a little modest in how it bills its cracker of a jackhammer. You can break up a 15-metre concrete driveway, demolish 15-centimetre gate posts, and even break up rocks using Reasejoy’s rig.

The side handle rotates 360 degrees for best positioning.

One excellent feature is the handles, which are shock-absorbent ‘to reduce operator fatigue,’ as Reasejoy puts it, and accurately so because this concrete breaker’s vibrations are relatively controlled and on the low side. Another good feature is the lock-on button; it enables you to operate the breaker without keeping your fingers on the trigger which can be a welcome relief during long jobs.

Reasejoy’s claims of a double-insulated motor casing and ‘extra thick and strong aluminium main casing’ seem valid, for this is a particularly hard-wearing and durable rig.

Included are three chisels (point, flat, and ‘U’), 3 wrenches (5, 6, and 8), and a pair of carbon brushes. Also included is a starter safety kit comprising of goggles, earplugs, a breathing mask, and a pair of gloves. The steel case is satisfactory.

The power cord is 2.4 metres long.

You need to be quite strong and physically capable to use this brute, for at 22.5 kilos this is one heavyweight hammer.

Bosch’s pro rig has an eye-watering price but if you can afford it, it is incredibly light, has low vibrations, adjustable BPMs, and multi-position chisel setting.

This concrete breaker is chock-full of features and very configurable.

An obviously useful feature is a wheel with which to adjust the impact rate (BPMs) ‘for optimum performance,’ which gives it an edge over other concrete breakers. At the same time the Constant Electronic technology maintains the impact rate through varying resistance and material hardness.

Like a few other breakers, this one has an auto-lock so that you can withdraw your fingers from the trigger when breaking for extended periods. But one unusual feature is the 12-position chisel settings. After inserting the chisel, push the ring forward and turn the chisel to the desired position along with the ring. Then release the ring and slightly turn the chisel until it locks.

Perhaps the most user-friendly feature is vibration control technology that minimises vibrations  transferred to the operator; if a concrete breaker could ever be called ‘smooth,’ this one’s it.

At 6.2 kilogrammes, the operator will have to maintain some pressure to use it effectively; however, the lighter weight is a boon for extended usage and will be appreciated by those who are not exactly muscular and fully fit.

While this rig breaks up layers of concrete and mortar like there’s no tomorrow, there is no question that its main claim to fame is all its bells and whistles but for which you pay a premium price. We feel that these bells and whistles are overkill – after all, we are not talking about an angle grinder or a palm router; it’s a jackhammer; it’s simple and only a demolition tool.

It comes with a good carrying case and inconsequential extras; chisels are not included.

The GSH 5 is not a popular item, probably because of its price. We do feel that this rig is overpriced though users who have a particular need for its features, or who cannot handle heavier, rougher, concrete breakers may opt to buy it in spite of its high cost.

What Is A Concrete Breaker Used For?

A concrete breaker, also called demolition hammer or jackhammer, does exactly what its name suggests; call it concrete’s worst enemy. It is especially useful in small or confined areas that can’t be accessed with a compressor-based pneumatic jackhammer.

One person working alone can use a concrete breaker to break up and demolish concrete structures such as slabs, platforms, posts, paths, patios – anything really – and also asphalt, brick, and rocks (though not boulders).

How To Use A Concrete Breaker

You need to be physically fit, if not exactly strong, to use a concrete breaker.

Before you use one, check whether it has oil. You may need to add oil, usually to the halfway point or to a mark or a notch and be sure to use the right type of oil as specified by the manufacturer.

Next, verify that your power source is about double the power rating of your concrete breaker and that the frequencies (in CPS or hertz) match.

Finally, round up a friend or two. Otherwise you’ll be doing double duty.

Before you switch on the concrete breaker, you need to wear goggles, ear defenders, and a particulate matter or dustproof mask. In addition, wear thick gloves and consider wearing a hard hat.

Let’s assume you want to break up a concrete slab, patio, or driveway.