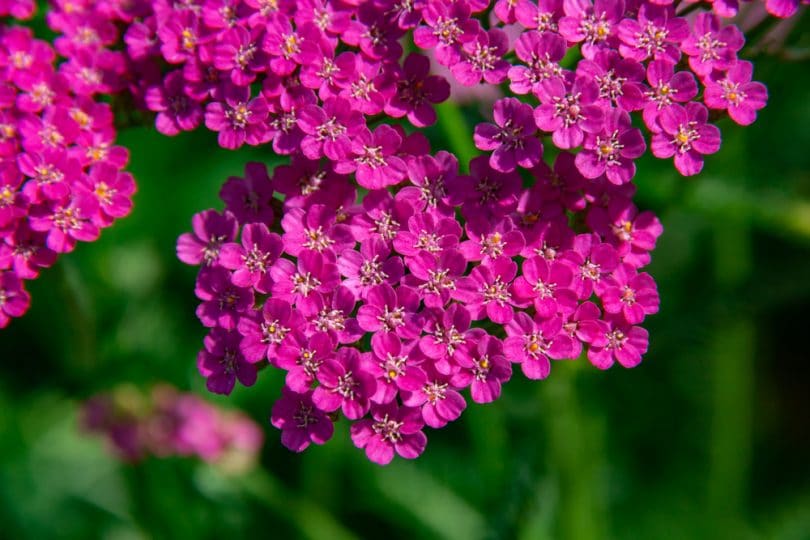 Achillea plants aka ‘yarrows’ are a perennial that have a distinctive look and are very popular with gardeners throughout the UK due to their hardiness and unique beauty.

Considered part of the daisy family – achillea yarrows have a variety of colourful flowers and lush foliage. Many growers have a fondness for achillea since they are quite easy to grow and look after and look great when used with other plants.

If you want to grow achillea, either in your garden or in pots, then you should find the information below incredibly useful.

We’ve covered every aspect of achillea, including their different varieties, how to plant and care for them, common pests and diseases and FAQs.

Achillea millefolium, or yarrows, are part of the Asteraceae family and are native to several countries in the Northern Hemisphere, including the UK, China and the US. Today, they’re grown all around the world for their beauty as well as being used as a medicine and herb.

Achillea millefolium is the most common type of achillea plant and have small white, pink-tinged flowers and grows natively throughout Europe.

Achillea plants can vary a lot in their appearance depending on the species. Below are some of the other varieties –

Moonshine achillea is incredibly popular with growers, thanks to their distinctive silvery leaves and vibrant yellow flowers. They are a sterile variety of achillea, making them very easy to control, with the only real maintenance required being some light pruning. Moonshine can grow to be 18” tall.

As you would guess from the name – this variety of achillea have violet flowers and would make a great choice to use with other perennials, including other achillea varieties.

They are very easy to grow and resistant to the cold, making them a popular choice with gardeners in the UK.

Although not quite as colourful as some other varieties, achillea nobilis would still make an excellent choice as a plant to mix with others. They are also able to thrive even during very dry spells.

Red Velvet achillea are a great choice if you want to add colour to your garden. Their deep red flowers look great when mixed with other plants and they are very tolerant to dry spells, making them quite easy to grow and care for.

Like most achillea plants, they are great for attracting bees and butterflies to your garden.

Growing achillea in containers is quite simple, whether you choose to buy established plants, or grow them yourself from seeds. Growing from seed is the cheaper option of the two, and since achillea germinates very quickly, you don’t need to wait too long to see them flourishing.

Achillea does best with exposure to full sunlight, so it’s best to place them in a sunny spot. They can still do well in partial shade too, however. Always make sure you use containers that are big enough to accommodate your plants as they grow.

Growing in a flowerbed

If you want to grow achillea outdoors in a flowerbed, then you have a couple of choices. You can either buy already established plants and replant them; or use seed or a plant that you’ve grown in a container.

If you’re sowing from seed, then the best time to do this would be during the spring or early summer. This will give them time to get established without the need to worry about frost damage or the soil being too saturated.

When picking a spot to plant them, you should opt for a position that gets plenty of direct sunlight. This will ensure they flower well and are less susceptible to certain fungal diseases.

Achillea are not difficult at all when it comes to their water and soil requirements. Generally, they can do very well, even in dry conditions. This means you won’t usually need to water them other than during particularly long dry spells.

As for soil requirements – achillea will do well in most types of soil, even heavy clay soil. Ideally your soil would be light and open, but if not, your plants should still be ok.

The main thing to be aware of is that if you’re planting in soil that’s not optimal, then you should make sure you avoid planting them later in the year so there’s no risk of frost damage or the soil being waterlogged while they’re getting established.

Generally, achillea doesn’t need to be pruned. However, it is recommended that you deadhead them to encourage optimal flowering. You can also take cuttings, either to use in a vase or for propagation.

You may also choose to cut them back at the end of the summer if you want a tidier appearance during the autumn and winter months.

Besides looking great as an ornamental plant, achillea has some practical uses too. Below are some of the other things achillea plants are used for –

Achillea are completely edible and the leaves and flowers are often added to salads and other dishes. Although it’s not as common to use achillea in cooking as some other herbs, it’s still a very viable choice if you want to add an extra flavour to your dishes.

Achillea plants are also used for medicinal purposes. It can be used to treat common ailments, such as colds, hay fever and diarrhoea. It can also be chewed to relieve toothache.

The various varieties of achillea were used extensively by Native American tribes for many years. They used it to treat various sicknesses and as a vitality medicine.

The three main ways to propagate achillea are by division, seed and cuttings. Let’s start by looking at propagating by division.

Achillea flowers grow outwards from the central part of the plant. You can take these smaller flowers and replant them in order to propagate. You should do this in early spring and make sure that when you’re replanting them, they’re at the same height as they were originally. Also be sure to water them well so they can get established.

Another reliable way to propagate achillea is using seed. You can collect the fallen seed from your existing plants in late summer/early autumn. You then can either plant them in containers indoors during the winter; or wait until spring and plant them directly in your garden.

If you choose to plant them in containers, then it’s a good idea to use a fertiliser to help them get established. It’s also important to keep the soil moist and transfer them to larger containers as needed. All being well, you should notice them germinate in 2-4 weeks.

Lastly, is using cuttings. You can take cuttings from your achillea plants and plant them in containers until they get established. The best time to take the cuttings would be in early spring, when they’re first starting to grow. Be sure to water them well and use good quality soil/compost to give them the best chance of flowering.

Achillea are generally problem-free, providing they’re properly cared for. Still, there are certain diseases and pests that can cause issues. Below are some of the most common problems as well as how to deal with them –

Rust is a general term for a number of fungal diseases that cause rust-coloured spots to appear on the leaves of infected plants. To prevent rust, you should ensure good air circulation and avoid getting water on leaves. If you notice any plants that are badly infected, then you should dig them up and destroy them to prevent it spreading.

Powdery mildew is a fungal disease that affects many different types of plants. When infected, the leaves of the plant will have a coat of white mildew on top of them that’s not dissimilar in appearance to powder.

In order to avoid powdery mildew becoming an issue, you should take care when watering plants to ensure that water doesn’t splash up onto the leaves. Adding a layer of mulch is a good way to avoid this. You should also space plants out enough to provide good air circulation.

Crown gall is a particularly troublesome disease that can sometimes affect achillea plants. It damages many parts of the plants that it infects and can cause stunted growth and loss of leaves. Unfortunately, there’s no way to treat plants with crown gall, so if you notice any plants that are affected by it, you should dig them up immediately and destroy them.

Mealybugs are very small insects that leave behind a white powder on the branches and leaves of plants they infest. In addition to this, they also drink from the leaves, which results in poor growth. They also excrete honeydew, which will mould after a while as well as attracting ants.

If you notice mealybugs on your plants, then you can get rid of them by either washing them off the surface using water. If you want to reduce the risk of it appearing in the first place, you can use plants to attract predator insects, such as wasps and ladybirds.

In addition to feeding on the underside of leaves, aphids also leave behind a residue that can attract ants, causing even more damage. Thankfully, they are quite easy to get rid of. If you notice them on your plants, then a few blasts of water or soapy water should be enough to remove them.

Spider mites are another pest that can affect achillea. Despite their tiny size, they can still cause a lot of damage to plants by sucking the juices out of them. They multiply very quickly and can damage the foliage of plants considerably.

You can usually spot spider mites from the webbing they leave behind. If you notice them on your plants, then water or an insecticide should do the job.

Thrips are very small insects that attack different parts of plants they infest, including the stem, leaves and petals. You can usually spot plants that are infested with thrips by the leaves changing colour – having a discoloured or silvery appearance to them.

You can get rid of thrips by using soapy water or a good insecticide on them. It’s also recommended that you remove any plants that are seriously affected by them to prevent spreading.

Can you grow achillea in pots?

Yes. Achillea are ideal for growing in containers due to being extremely hardy and a perennial.

Achillea will usually spread in the wild, but it’s quite easy to keep on top of it when planting in your garden. Certain species are more aggressive so bear this in mind when buying achillea plants.

How tall does achillea grow?

The majority of achillea plants grow to be between 1.5-4 feet tall.

Is achillea a perennial?

Yes, achillea are perennials, so you’ll be able to enjoy them for many years after first planting them.

Where should I plant achillea?

The best time to plant achillea would be in the late spring or early summer. Planting at this time will ensure they’re not at any risk of frost damage and they’ll benefit from getting plenty of sunlight while they get established.

Are achillea suitable for indoor arrangements?

Some varieties of achillea are better than others for indoor vase arrangements, such as The Pearl and White Giant. Always be sure to take cuttings from plants that are healthy and when new growth is coming through in the spring.

Be sure to cut the stems at a 45° angle and that you place the cuttings into water as soon as possible. You should also remove any foliage that would be undeath the water and find a place to put the vase that’s out of direct sunlight.